Lebanon has a heritage almost as old as the earliest evidence of mankind. Its geographic position as a crossroads linking the Mediterranean Basin with the great Asian hinterland has conferred on it a cosmopolitan character and a multicultural legacy. Lebanon has an Arab culture colored by Western influences.

At different periods of its history, Lebanon has come under the domination of foreign rulers, including Assyrians, Babylonians, Persians, Greeks, Romans, and Ottomans. Although often conquered, the Lebanese take pride in their rebellions against despotic and repressive rulers. Moreover, despite foreign domination, Lebanon’s mountainous terrain has provided it with a certain protective isolation, enabling it to survive with an identity all its own.

Its proximity to the sea has ensured that throughout its history Lebanon has held an important position as a trading center. This tradition of commerce began with the Phoenicians and continued through many centuries, remaining almost unaffected by foreign rule and the worst periods of internal strife.

The many civilizations have left their traces and markings in numerous cities: 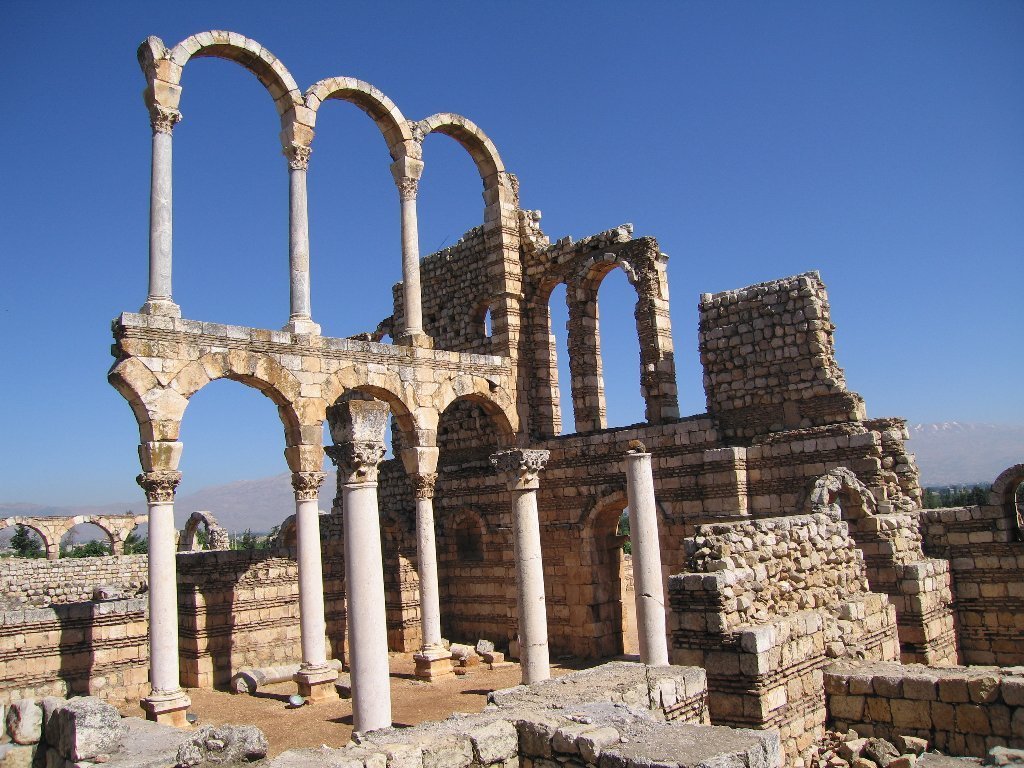 Aanjar is a relatively new civilization compared to what is found at other historic sites in Lebanon. It is exclusively one period, that of the Umayyads, which goes back to the eighth century A.D. The Umayyads were the first hereditary dynasty of Islam. They are credited with the Arab conquest that created an Islamic empire stretching from the Indus Valley to Southern France. The empire prospered for about 100 years, until its rivals, the Abbasids, took advantage of the Umayyad’s decadence and defeated them two miles from the city. 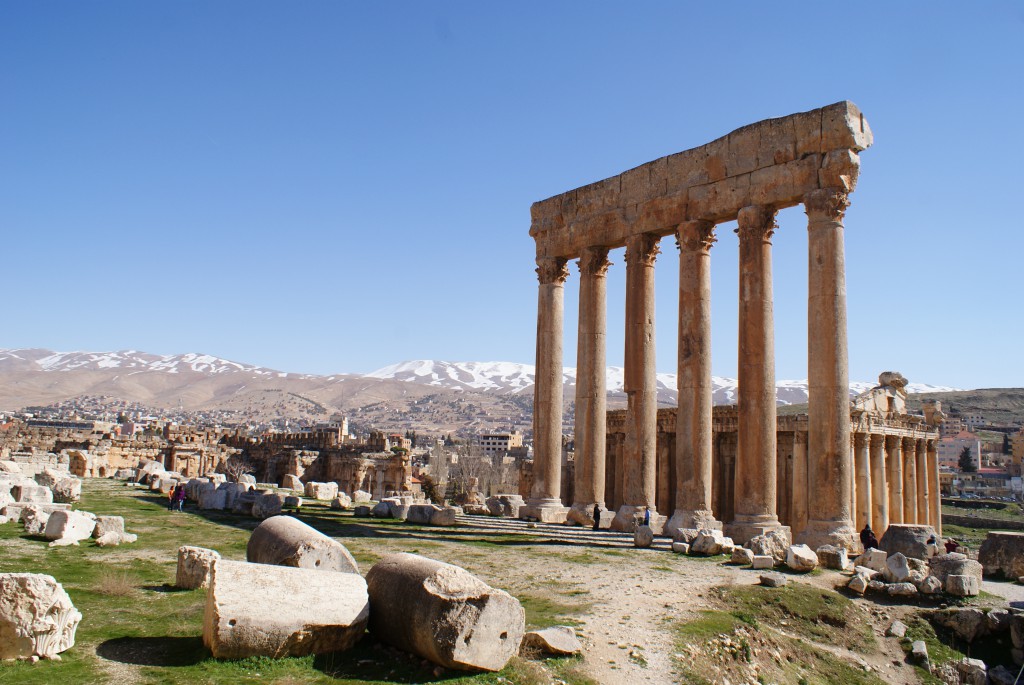 Baalbeck’s temples were built around the first millennium B.C. The enclosed court was built on the ancient tell. The more accurate history of Baalbeck first begins during the Hellenistic period (333-64 B.C.). The Greeks identified the god of Baalbeck with the sun god and enlarged the court. The temple was begun in the last quarter of the first century B.C., and was nearing completion in the last years of Nero’s reign. The Great Court Complex of the Temple of Jupiter was built in the second century A.D. The other addendum courts to the Jupiter Temple were added in the third century.
The Baalbeck temples were officially closed in 313 A.D., when Byzantine Emperor Constantine officially closed them. Since then these monuments have gone through many transformations, falling under Arab domination, and the Omayyad, Abbasid, Toulounid, Fatimid and Ayyoubid dynasties. It was sacked by the Mongols in 1260, but later has enjoyed a period of calm and prosperity. 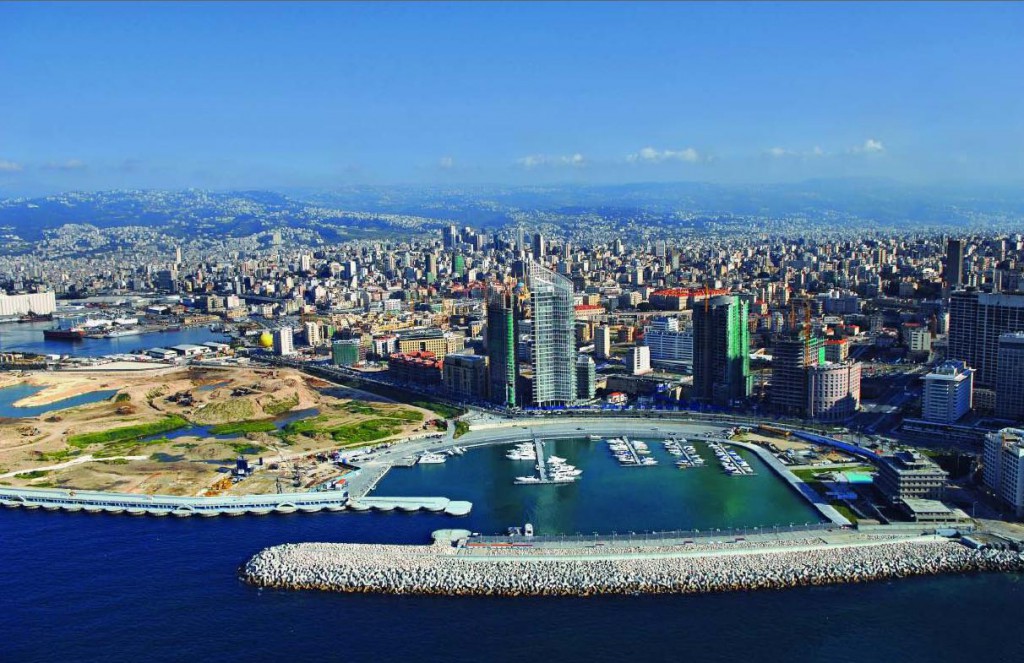 Beirut’s history dates back over 5,000 years. Under the city’s downtown area lie remnants of Ottoman, Mamluke, Crusader, Abbassid, Omayyad, Byzantine, Roman, Persian, Phoenician and Canaanite Beirut. Its name first appeared in cuneiform as early as the 14th century B.C. In the first century B.C., it became a Roman colony, only to be destroyed later by a triple catastrophe of earthquake, tidal wave and fire in 551A.D. Arab control then dominated until the Crusaders took over in 1110. Following the Crusaders were the Mamlukes and the Turks. After World War I there was a French mandate period, and in 1943 Lebanon gained its independence.

This palace was built by Emir Bechir Chehab II in the early 19th century. The palace remained the emir’s residence until his forced exile in 1840, when the Ottomans used it as the government residence. It was declared a historic monument in 1934, and then began a restoration process. Since 1943, it has been the summer home of the president. 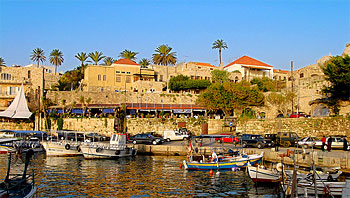 Although it is impossible to pinpoint the exact establishment of the city, scholars say the site goes back at least 7,000 years. After living for years as the home of fishing communities, Canaanite Byblos was slightly different in that it developed into the most important shipping center on the eastern Mediterranean. Trade with Egypt was immense, and instituted a period of wealth and prosperity. Around 1200 B.C. a wave of “Sea Peoples” from the north settled on the southern coast. They had the maritime skills and society we know as Phoenicia. About this time the groundwork for the modern alphabet was first being proposed in Byblos.
Like all other cities in this area, Byblos was subject to conquest. The Persians were first, and were assimilated into Greek culture and customs, which were continued into the Roman times. During Roman rule, temples, baths and other public buildings were built. Following the Roman rule was the Byzantine Period, followed by Arab rule in 637A.D. In 1104, Byblos fell to the Crusaders, and then turned over to Mamluke and Ottoman rule. 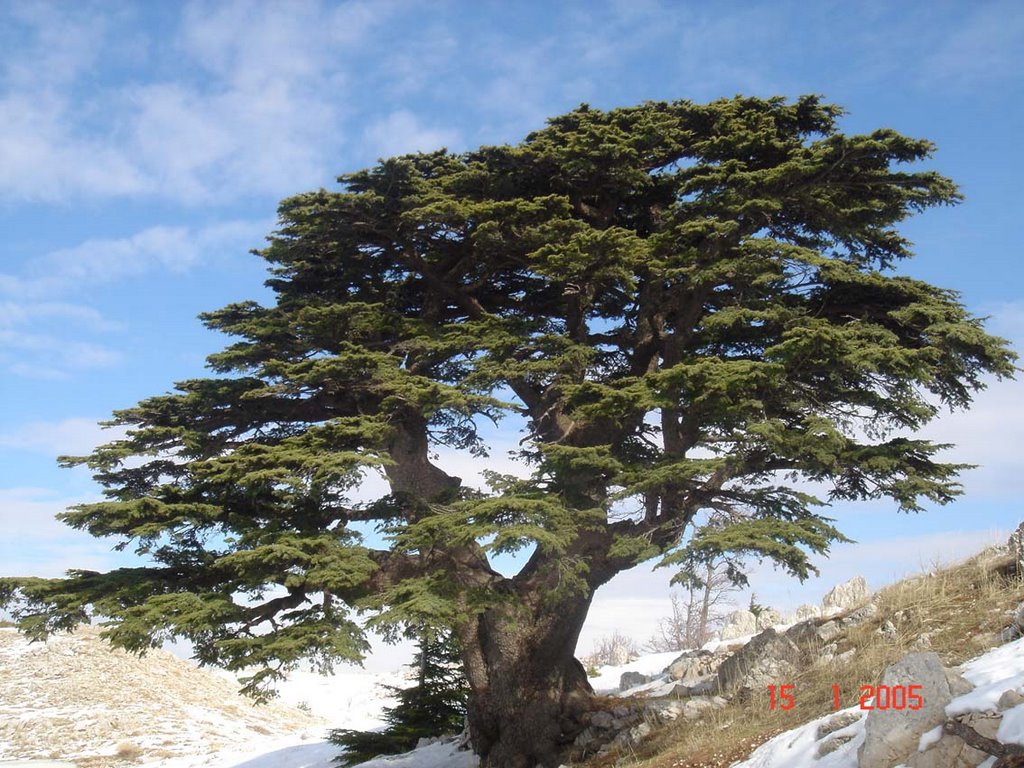 The cedar is a historical entity mentioned in the Bible and other ancient texts and played a large role in the culture and religion in the Middle East. Exploitation of these forests date back to the third millennium B.C., with coastal towns such as Byblos making money using it as timber. It continued with the Assyrians, Babylonians and Persians. In ancient times, the cedars were used for roofs of temples, to construct tombs and other major buildings. Many forests were cleared for farmland in the Middle Ages. The Ottomans destroyed quite a bit of the forest in the 19th century, and during World War II much of the wood was used for building railroads. 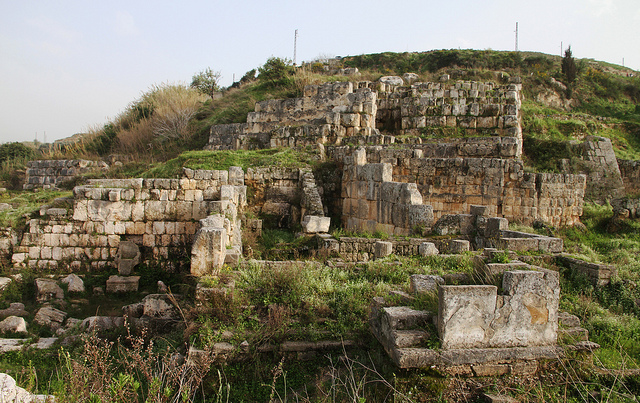 This historical site is traced back to the myth of the young hunter Eshmoun. The goddess Astarte fell in love with him, but to escape her advances he mutilated himself and died. He was brought back as a god, and is now seen as the god of healing. Sidon is the closest city and considered Eshmoun to be a very important god. A temple was erected in his honor during the reign of Eshmounazar II, and existed until the middle fourth century B.C., when it was destroyed. The site, although littered by debris and crumbling, remained popular until the end of the third century A.D. 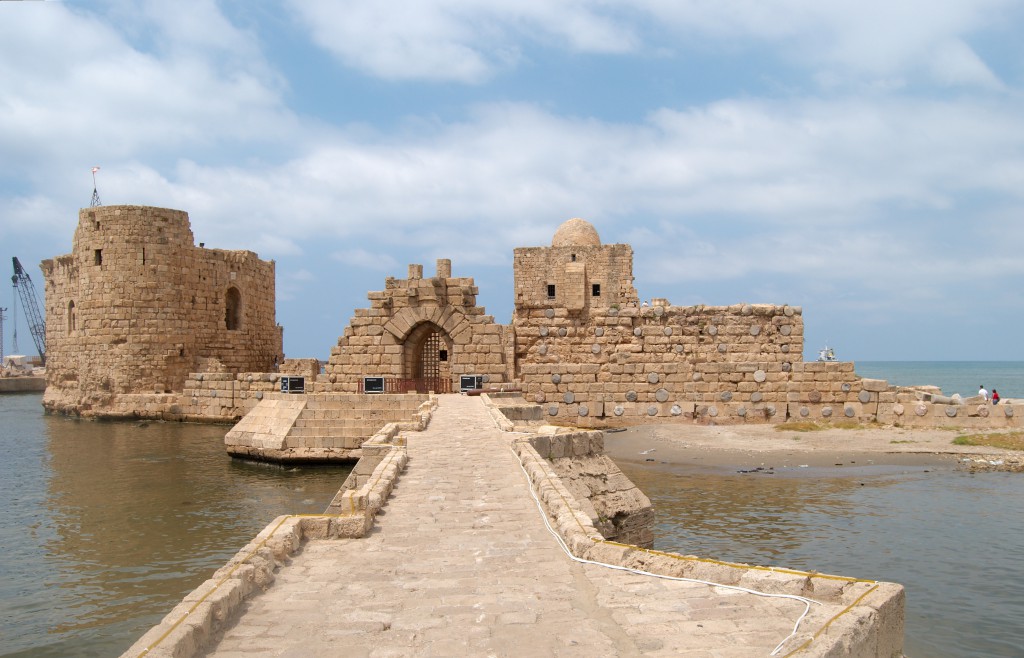 There is evidence that Sidon was inhabited as early as Neolithic times. The city was built facing an island to protect it from inland attacks. During the Persian Empire the city provided the Persia with ships and seamen to fight the Egyptians and Greeks, which gave them a favored position within the Empire. During the Phoenician Era, glass manufacturing was Sidon’s most important enterprise along with purple dye. Sidon, like most states in Phoenicia, was subject to conquest. Alexander was one of many rulers who took the city. Under Alexander’s successors, the city enjoyed relative freedom. During the Roman reign in Sidon, theaters and other major monuments were built. After a turbulent Crusader age, which saw the city change hands numerous times, it finally fell under the control of Mamluke forces. Sidon flourished during the 15th and 17th centuries especially, due to its location and use as a port between France and Syria. 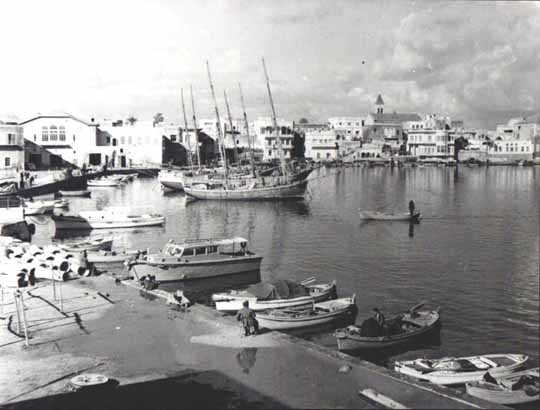 The real history of Tripoli began in the 9th century B.C., when the Phoenicians established it as a trading station. Under the Persians, it was the home to the confederation of Phoenician states that included Sidon and Tyre. During Alexander the Great’s rule the great the city was used as a naval shipyard mainly, and the Romans enhanced the city during their reign by building several monuments. The Crusaders who took over in 1109 destroyed the city. After many years the city was turned over to the Ottoman Turks in 1516, where it retained prosperity and commercial importance. The Ottoman rule saw great strides in the field of architecture there as well. 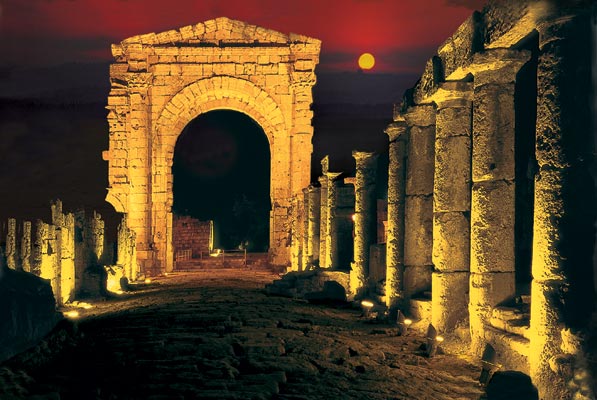 Tyre began to flourish in the first millennium B.C., although it was founded much earlier. The city was attacked numerous times, beginning with Nebuchadenezzar in the sixth century B.C. Alexander successfully took it in 332 B.C. for strategic reasons. By 64 B.C., Tyre was under Roman rule. The Romans built many monuments in the city, including an aqueduct, a triumphal arch and the largest hippodrome in antiquity. Much later it was taken by the Byzantine Empire, until Islamic armies took over in 634. The city continued to prosper as a trading post. After a brief stint with Crusader rule, it was taken over by Ottomans until after World War I, when it was integrated into Lebanon. 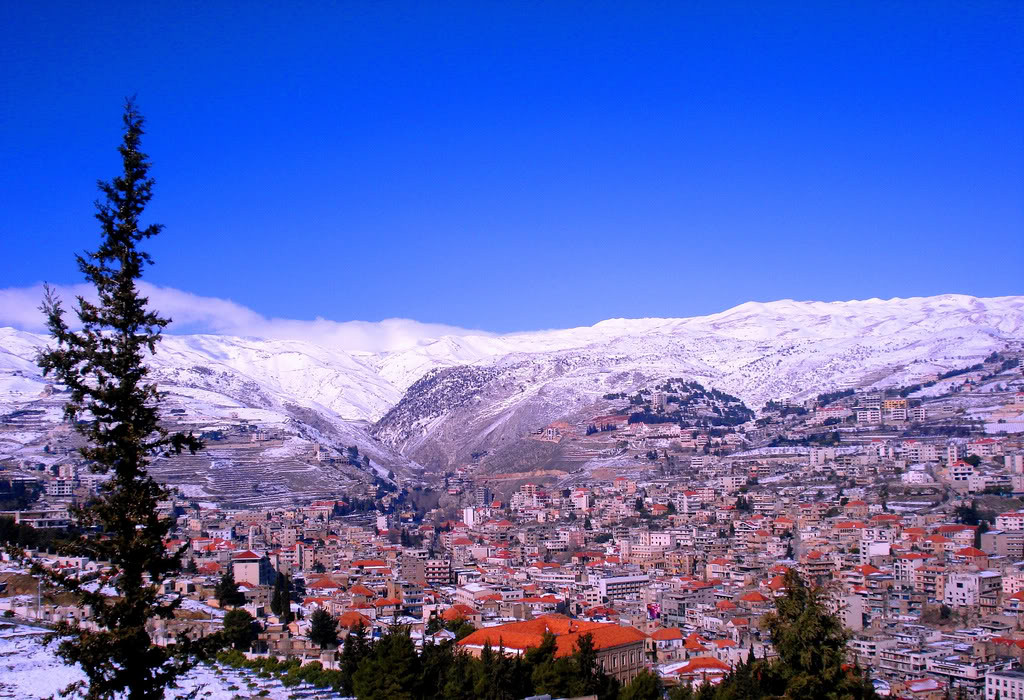 Zahle was founded over 300 years ago. In the early 18th century the town was divided into three separate sections, each of which had its own governor. The city was the region’s first independent state later in the 19th century when it possessed its own flag and anthem. It became the center of agriculture and trade between Beirut, Damascus, and Baghdad due to its railway. Zahle has played a major role in the establishment of the country, as it is considered the birthplace of the Lebanese Army.